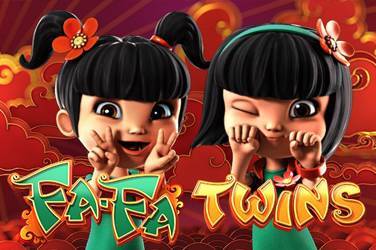 Overview Promotions How to Play
PLAY FOR REAL
Overview

FaFa Twins is a Japanese anime-inspired online video slots game created by Betsoft. The graphics and sounds in this game are best described as cute and are centred around two adorable anime twins. Set against a vibrant red background with peaceful music playing, these twins stay by your side throughout the game.

Fa Fa Twins slot game is a 5-reel, 3 row game with 243 ways to win. The top prize is 5000 coins and is rewarded when you land five Fa Fa symbols in a row. This is likely to be a rare occurrence in the game, but it has to happen to someone right.

This game keeps it relatively simple with the only special features being dual reel boosts and the double-up game. However, with 243 ways to win, there won’t be a dull moment.

The oriental-themed playing cards represent the lower value symbols, and you will find 10, J, Q, K and A.

Next up are the cards that will land you a medium-sized purse if you find a winning combination. These are a lantern, a lotus flower, a golden koi fish, a green purse filled with gold coins and a golden cat.

The highest paying symbol is a framed picture of the Fa Fa twins.

Finally, the wild symbol is the game logo that will only appear in reels two, three, four and five. The wild can be substituted for any other symbol.

Before each spin at least two adjacent reels will have the same symbol giving you a match straight away and therefore increasing your chances of landing a winning combo before you’ve even hit spin. This feature can extend across five reels, which would mean a large cash prize.

The double-up game can be activated after any payout by hitting the ‘double up’ button next to spin.

A new game screen pops ups, and you have the chance to bet all or half of your winnings on the flip of a coin. If you guess heads or tails correctly, you double your winnings. If you guess wrong, you can say goodbye to your money.

The game starts with an introduction from the Fa Fa twins who will take you to the betting screen. This slots game is simple to play, with bets starting from £0.50 up to £125 for those wanting to risk higher stakes for higher returns. With no free spins feature, this game is all about finding the winning combinations with the help of the dual reel boost and then capitalising on your wins with the double-up game. With 243 ways to win, there won’t be a shortage of action in this cute anime game.

The pocket-sized twins can go with you anywhere as the Betsoft game is available on all mobile and tablet devices.

Fa Fa Twins slot game is unique. The makers of Betsoft have moved away from free spins and multipliers that we see on a lot of video slots and created some new and exciting game features to keep gamblers entertained.

This is an necessary category.