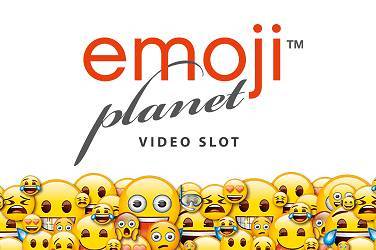 Overview Promotions How to Play
PLAY FOR REAL
Overview

Emojis have been around for a while now. They first appeared in 1999, in Japan. Since then, they have taken the world by storm. It makes sense to bring emoji features to online slots, and NetEnt had done this well. The Swedish software design company has created a hugely entertaining and funny game that was launched in 2017 when the Emojis movie was very popular. The slot is based around the Avalanche™ system, and Cluster Pays™ rather than traditional reels and pay lines. This gives Emoji Planet a fresh and vital feel.

The Emoji Planet slot features symbols that avalanche into place rather than spinning. To secure any payout, you need to gather at least five symbols horizontally or vertically. To grab the biggest wins, you need to gather as many symbols as possible, up to a maximum of 30. There are many different fun emoji-based symbols in this game, including blue hearts, a rocket, a bomb and a pizza slice. The most rewarding symbol is the big yellow smiley face. This can reward you with up to 500x your bet if you get a total of 30 symbols.

There are several different features that you can enjoy in the Emoji Planet slot.

The wild symbol in this NetEnt slot is star-shaped. It can feature anywhere in the game and substitutes for other symbols. This gives you more opportunities to achieve good wins.

Several different features can activate when playing Emoji Planet. The features activate when one of the meters at the right-hand side of the game fills up. These meters are filled by achieving cluster wins during the game. These are the features that you can experience.

The Emoji Planet slot is simple to play. Before you start, you can use the +/- button to adjust the coin value. If you want to choose the maximum bet, you can simply use the Max Bet button. Once you are happy with the settings you have chosen, you just need to press the spin button to start the game. If you prefer, you can choose the autoplay option if you do not want to have to press to start for each game.

You are not restricted to playing this slot on a desktop or laptop. You can take the Emoji fun with you because Emoji Planet is compatible with mobile devices such as smartphones and tablets.

Ever since Emojis were first created in 1999, they have been hugely popular. This fascinating and fun slot uses this popularity and brings it to the fingertips of players.

This is an necessary category.